Monday night, my boss and I ventured over to Las Tasca for some tapas.
We had an eggplant appetizer (Berenjenas Fritas con Queso Cabrales)- thinly sliced eggplant, battered and fried, served with a Cabrales cheese dip. My boss is a vegetarian so she ordered a potato dish (Patatas a lo Pobre) and a single serving of a veggie paella (Paella de Verduras). I had a bite of each- very tasty.
I had this beef dish (Buey al Jerez)- flank steak in a sherry and mushroom sauce: 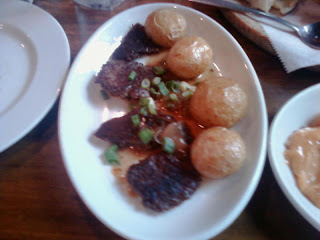 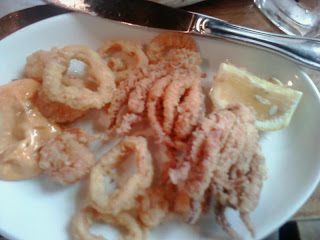 My only regret is not ordering any sangria. The list looked good but I just wasn't sure with the whole boss/work paying the tab thing... If you go to the link and check out the menu, there is a list of Sangrias... Sangria Rosada...

She and I did each have a glass of wine at the airport before flying home... had I only known...

Someday, Christy and I will venture out for tapas together... spend several hours over our food and sample many dishes and consume much alcohol...

This is a chain and I am hereby very jealous of any of you who have one in your area. We ate breakfast here Tues and Weds and liked it so much, we did lunch there on Weds! I had the same breakfast both days- the Anaheim Scrambler. Eggs scrambled with bacon, tomatoes, green onion, cheddar cheese, topped with chunks of avocado and an avocado slice. I love avocado but have never had it with eggs. It is heavenly!! The toast was really, really good, too. For lunch, I had The Trio- pick 3 side salads. I did the chicken salad (chicken, apples, currants, red onion, celery, mayo, almonds), asian edamame salad (edamame, cherry tomatoes, cucumber, red pepper, carrots, green onion, basil, cilantro, ginger citrus dressing), and the greek vegetable salad (cucumbers, tomatoes, artichokes, pepperoncini, kalamata olives, red onions, white balsamic, feta).

The Corner Bakery Cafe was named one of the Top 10 Healthiest Quick Serve Chains by Health Magazine!

Tuesday's lunch was a place called California Tortilla. It was ok but nothing to get excited over and we have comparable places here in Indy.

We did get sandwiches in the airport. Minimal selection of eateries at Ronald Reagan Airport. We had started to go to this "Europa Cafe" place but a pilot stopped me ands aid that the food was much better at Allie's deli- sandwiches made fresh instead of the pre-made and packaged stuff at Europa. He said he flies in there once a week and has tried it all and said Allie's was the place to go! And he was right- fantastic turkey sandwich.

Christy's birthday is next week and I plan to take her out to dinner... Fogo de Chão

So when are you ditching us for Fogo?

Not any time really soon... this weekend is busy already, she's out of town next weekend, etc, etc, etc. Are you interested in coming, too? Because you totally could... we would just need to have my mom come stay for a weekend or something...

Sounds yummy. There doesn't seem to be one in my area right now, but I'm sure we'll see one in TX.

Mmmmmm, Calamari!!! Not likely to pass my lips any time soon (at least not in it's fried state) and oh how I love it.

And sangria. Carrabba's has the hand's down best red sangria. They sprinkle it with cinnamon.

Now my tummy is growling. Thanks Liz.