We have entered the Dinosaur Age... The kids are both really into dinosaurs and Teagan even had a week about dinosaurs at school. One of our favorite PBS shows is Dinosaur Train (even when it is so very scientifically wrong). Through all of this, Teagan has learned about carnivores and herbivores.
At dinner, while taking a bite of chicken, Teagan announced that "This is meat! We're carnivores!"
Jeff and I agreed and were excited about her expression of retained knowledge. We also went on to explain that humans eat both plants and animals so we are actually omnivores- we eat everything.
Teagan's response...
"Yeah! I'm one of those! I'm a dinosaur that eats everything except I don't like broccoli so I'm whatever dinosaur eats everything except broccoli." 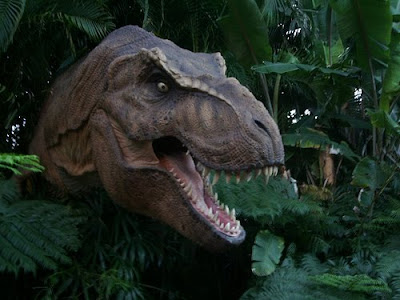 My kids love Dinosaur Train too, and I've gotten a kick out of hearing Chickie sing "I'm a hungry hungry herbivore."

My jaw dropped when, on his third birthday, my nephew went through an entire thing of dinosaurs he'd gotten as a present and correctly identified almost ALL of them. It's amazing what kids can retain!

Reminds me of the line in Jurassic Park: "Is this one a m-m-meatasaurus?"

I fear the dinosaur train is about to stop here...Dino Fun Fair Festival coming up at my son's preschool. And so it starts.

If your kids love dinos, then you really MUST go to Dinosaur World in Cave City, Kentucky. Totally a tourist trap, but totally AWESOME! It was our best accidental find.

Oh my gosh. That is such a cute story. LOVE it!