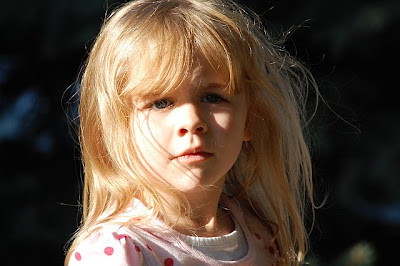 Lying is developmentally normal. It's a creative exercise. And it is one of the most frustrating behaviors to deal with. Teagan lies. And I just found out that she's been consistently lying at school for about 2 weeks. Sometimes in normal small ways- making up a story in order to compete for attention. But it's gone further than that. She lies to get other kids in trouble. She lies just to make things happen. The big lie today was when she was asked to go and ask another teacher a simple question and report back with the answer- "How many kids are in your class?" She did that. But then took it a step further. "Oh, ok, 9. Um, you need to send half your kids to my class and we'll send half our kids to you." After no kids came back over... and confusion as to why all these kids came back with Teagan... the 2 teachers figured out that their trust had been totally played. It isn't so much the lying in response to confrontation or lying as a way of getting the attention she sees someone else getting. It's the lying about other kids and making up complete fabrications. Before I go any further... I have a confession to make. I used to be a liar. A big time liar. A lie about everything for no reason liar. So I can totally see that "self" in my daughter and it scares me. I lied to protect myself, to keep my actual self buried deep inside, to direct attention the way I wanted it. At the end of high school, when I got serious help through some intense therapy for all the issues stemming form the childhood abuse I survived, I came to my senses. No big epiphany. But I think I learned my biggest life lesson ever when I told my mom my biggest truth ever- that I had been abused by my cousin for several years- and she immediately believed me. I didn't deserve her trust because I had lied and lied and lied since I was about Teagan's age. I lied so much that I believed my lies sometimes. But that one huge Truth and my family, my mom and dad, believed me... trusted me... helped me... that taught me more about love and honesty and trust than any other lesson ever could. Back to Teagan and our school issue. School has a plan in place to manage the behavior there and will be communicating with me so we are all on the same page. But it rocked Teagan's socks when I brought up here little class switch story. I focused on her not being in trouble (one of her loops- "I don't wanna be in trouble"). But we needed to tell Daddy what had happened. I did so- very matter of factly, no tone to my voice. Just the facts, ma'am. And at certain points... Teagan's cries escalated and she'd proclaim "I don't wanna be in trouble!" My reply? A simple explanation- "Teagan, what you are feeling is guilt." And then I'd go back to the story. Bedtime... we talk some more. I talk pretty straight forward with her because she's in the right place for it. The loop is gone and she's open to it. So I tell her... That I think she's a very, very smart girl. And I think sometimes she has really great, smart, fun, creative ideas. And when your brain works as hard as hers does and is so full of ideas... she has to figure out what things are ideas, solutions, games and what things are made up stories- lies. And that when she takes her ideas and tries to tell them like they are real, she hurts herself the most. Yes, she hurts Mommy or Ms Lori or Ms Carly... but she hurts herself the most. Because, for example, Ms Carly really believes the things Teagan says and Ms Carly and her other teachers know that Teagan can be a great helper and be very responsible. But when Teagan tells lies, that means she can't be trusted anymore. And that means she can't have special jobs or responsibilities any more. And that means that her lie she told- and those brief moments of feeling good- end up with her hurting herself. Here is what I know absolutely for sure. I don't and won't question her about lies. At home, when she's caught in a lie, she doesn't get chances to come clean or whatever. She lies and we just call her on it. "Teagan, that's a lie. We don't tell lies in this family because trust is an important part of this family." That's it, end of story. I don't want explanations or stories or questions. Here's the behavior, here's why it isn't ok. I also think it's a clear way for her to not get the attention she is seeking when she lies. I won't lie to her about lies. I've read suggestions where you tell your child they have a light that comes on in their forehead when they lie... Um, why would you lie to teach your child not to lie? makes no sense and goes against everything I said in that statement above. We don't tell lies in this family because trust is an important part of this family. Please share your experience with kids and lying. I'll take any advice I can get on handling this one!
Labels: parenting, Teagan

We didn't get a lot of lying from David and Caitlin when they were younger, Tom was a bit prone to it though.

I think with David it was because he was, and is, a very literal child and it was really important to him for other people to be truthful at all times. He hated those jokes where adults tell a young kid something outrageous and expect the kid to laugh when they realise it's not true, he'd get angry instead.

Of course he lies through his teeth about homework and chores and the like now, but he's terrible at it and I nearly always know.

I think your approach of emphasising the importance of trust is an excellent one, kids want to be believed and trusted.

I've always said to the kids that they will never get into trouble for telling the truth, which means that sometimes I'm stuck saying "Thank you for telling me, that had better never happen again" when I'd really rather say "HOW DARE YOU! YOU'RE GROUNDED FOR A WEEK!"

I think you are doing a great job dealing with the lieing. Keep it up!

Having 7 children, I've been in your place a few times. When I was a young mother, with my first child, he started lying, and if I thought he was lying, but wasn't positive, I'd say, "David Scott, I think you're lying. But I'm not sure. So when I talk to Heavenly Father tonight about my family, I'm going to ask him about this. And he will tell me." My son would fess up right there, BUT then, he got to be nearly eight years old, and one time after I said that, he goes, "Tell me what he says." So I couldn't use that anymore.
So since then I've said similar things that you're saying to your kiddos, but two thing I add when I am certain of their guilt, "I just want you to know that I know you're lying. Don't think you're getting away with it, because you're not." and the other is, "I never lie to you. If you want a good relationship with me, you need to be honest with me."

And that is all I got, sis. Hang in there.

I really like your response when you catch her in a lie. It's simple, to the point, and honest.

You're right- why would you lie about lying?

Oh my. Well, I don't have any good advice at all. I think that is so smart that you will just call her right out on it. I always tell Kaishon right away when I hear him starting to say something suspicious to think about it and he usually does.

Wow, Liz. This post comes at a good time for me. My almost-five-year old girl has started lying and it really upsets me. Like you, I lived in my own world as a youngster and told many lies. I don't want that for Squirt. You've given me some things to think about, but so far all I've done with Squirt is tell her lying is wrong and Jesus ALWAYS knows if she's telling a story or not. Then we say a prayer asking for help not to lie anymore.

Thanks for putting it out there, Liz. You give me so many things to consider trying in my own home.

A light on the forehead? I never heard of that. Now that's funny.

I could make up some advice for you...but it would be a lie.

I don't have any great advice to share with you, but I think you're handling it really well. I love the phrasing you've been using with her. I also wanted to say thank you for addressing the issue with such honesty. It can be so frustrating to read other blogs or chat with other mothers and get the sense that their children, and their parenting skills, are so perfect. While we aren't dealing with the lying issue, we've definitely got our own issues over here. It's nice to know there are safe places to air those things out.

Angie, I will always be and have always been open and honest about my parenting struggles. This is definitely a safe place to do so! Heck, if you've got a subject you want help exploring, please e-mail me: gentlemomlc (a) gmail.com

I agree about not dealing with lying by telling them a lie. Then again, I don't even do Santa/Easter Bunny/Tooth Fairy in part because I don't want to lie to my kids.

I used to have the most wonderful talent for tales!
Oh my goodness. When I was 8, I stole a pair of glasses from a friends dress-ups (I think they were an old pair of her mums)and I started wearing them at school. After a few weeks, the novelty wore off and I stopped wearing them. So the teacher asked me what happened to them. I said they didn't work in correcting the problem and I now needed contacts. One afternoon about a week later I was REALLY bored in class and suddenly shouted OH NO I've dropped a contact. I had the whole class looking for it.
I guess I was just really bored in school.

No advice, but I thank you for sharing what you are going through.

When I was a nanny and dealt with lying kids, I made sure to call them on it each and every time I knew they were lying. That way they knew they couldn't get away with it, at least with me.

It is definitely a sign of creativity and intelligence, though. Channeling those energies into something positive will help her correct the behavior.

Wow. She IS creative. I wonder what's at the bottom of her lies.

I used to be a liar, too, but in a weird way; I would make up stories just to keep the air filled with noise when I'd be with someone and we had a moment of silence, which I found too intimate to just allow. I had no epiphany, either (maybe it was my therapy :) but I happily learned that living in truth is just SO much easier!!