Not the Saturday I'd Hoped For

By the time you read this, chances are excellent that I am in a much more uplifted state of mind. I'm usually pretty good about lifting up out of a funk or relieving stress. My day started with a run. That's usually a great thing. I decided that I wanted to challenge myself a little, to push to through the next hurdle. So I got online and looked up the map for my upcoming 5K. My plan was to follow that map. Apparently, my sense of direction- or my memory- is a little off. This is the route. The red dot shows where I first turned the wrong way. The red line shows part of my extra route. This is an end of my neighborhood that I never go through so it's unfamiliar to me. 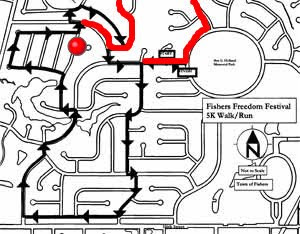 I barely made it past a mile when I took my first walking interval. I don't know for certain what went wrong. I have theories. I wasn't hydrated. I hadn't eaten anything. The air was soupy with humidity so I know my breathing was off. I can usually get to 2 miles before I have to stop and walk to recover a bit and then I push to run and walk as needed.

This is the extra route I took. About 1.5 miles. My 3.1 intention turned into a 4.5 torture. The air was thick and muggy- did I mention that? I was running and walking intervals. I was sweating and I knew I'd gone the wrong way. I got around the park (that big circle) and realized my sneakers were rubbing sore spots on my feet. I couldn't risk blisters 2 weeks before the 5K so I took my shoes off and walked home barefoot. Tried running barefoot since I'd seen others do it and since Christy has been learning a lot about minimalist running lately. 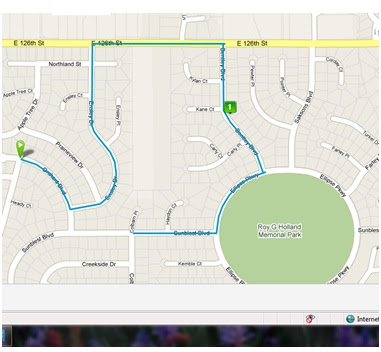 As I turned onto our street, exhausted, sweaty, hot, miserable- I saw something great and awful. Jeff had realized that I'd been gone far too long and had packed the kids into the car and gone out to find me (great). I saw him pull off our street at the other end (awful). I staggered home and called him and then collapsed on the floor.

Got showered and headed back out. I needed to stop by the Farmer's Market for some cooking oils I'd noticed last week. Then it was off to Teagan's last soccer game- without Teagan. Teagan came home from school on Wednesday with a fever of 101. I stayed home Thursday, Jeff stayed home Friday. Friday afternoon, the fever broke but the sore throat was still present. I went to soccer to pick up Teagan's first trophy. Brought home burgers and grapes and tomatoes so we could have our own little cookout to celebrate. Hard to celebrate when she didn't feel much like eating.

I hadn't intended to take her to the doctor. I'd gotten an e-mail from the school's director on Friday evening stating that many kids were out Thurs-Fri with fevers and 3 of them now had confirmed cases of strep. But since Teagan's fever had broken and her appetite was generally still healthy and she was drinking plenty of fluids... I didn't think she needed to go to the doctor.

Then the fever came back. 101 again. So off she and I went to "Immediate Care." She and I waited for 45 minutes in the waiting room. Thankfully, there's a TV and we also brought a stuffed animal, blanket, and a small stack of books. Finally get called back and do check in with the nurse and into a room. Then we wait another long timfore we see the doctor. They confirm that it's strep throat and give us a scrip for the pink stuff (amoxicillin). 2 hours after walking in the door, we head home.

At this point, my Saturday has been no fun at all. It's been relatively stressful, in fact.

I take Teagan home and drop her off with Jeff and head to Target to get the scrip filled. And I realized that a little retail / caffeine therapy was needed. Our Target has a Starbucks in it and Mocha Lite Frappucino seemed to be calling my name... and at only 150 calories, I didn't mind the indulgence! I was reminded of fellow blogger C. Beth's recent post about her own Starbucks therapy. Amazing what a little icy caffeine can do for the soul! 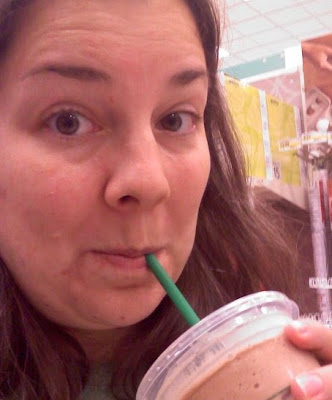 Enjoyed a little retail therapy, too. Bought book #9 in the Sookie Stackhouse series. Bought the last Jennifer Weiner book that finally came out in paperback. Bought some running/gym shorts. Bought some yummy smelling shower gel. Found some great clearance deals on items ideal for the local food pantry (peanut butter and a toothpaste / tooth brush combo pack). Then came home and realized my husband needed a break from the stress of home, too. He wanted to go to the roller derby, of all things. His friend is the announcer. Watching women beat the heck out of each other while on roller skates can certainly provide some stress relief, I suppose!

Ordered in pizza for dinner, had a glass of wine, put the kids to bed and enjoyed having the house to myself for a bit.

A stressful day that didn't go as planned at all. There was no plan, actually. But we do try to get out and about as a family on a Saturday and enjoy each other's company and spend time together. So a little disappointed that the weekend has to, instead, be focused on illness and being shut in. But Jeff and I are taking turns getting out of the house. If you read this on Sunday morning, I'll be at church, singing with music team and that will definitely up my spirits. If you read this Sunday afternoon, I might be at Trader Joe's with Zach or maybe Jeff took him to Fry's (electronics).

No matter... we're getting through the weekend. And you know what?

We're doing it together, as a family.

Those days can be so frustrating especially when you look forward to really relaxing on the weekend. I'm still proud of you for your inadvertently long run/walk though. :)

I always get the most comments on my blog when I have a MISadventure. I wonder if you'll get more?

At the end of this post, I was left happy instead of sad. I think the Starbuck's part uplifted me? Strange.

You should absolutely try and carry a phone with you in case of heat stroke or something!

First off, you got ALOT done in one day, so pat yourself on the back for that!
Second, you're a Mom of young children and you know as well as I do, some days are just like that--unpredictable! But you handled it like a seasoned champion Mommy and Daddy tag team duo!
I hope your sabbath is one of peace and rest.

I hate it when workouts go bad. It feels so defeating. But one bad workout is just that - ONE bad workout.

I hope your Sunday is a 1000% improvement over your Saturday! How's Teagan feeling?

Days like your Saturday are so stressful. It wore me out just reading about it! Hope T. is better soon and your Sunday has more bright spots that your Saturday!

Garret, I just ordered my new phone and it has apps for runners so I will definitely be carrying it with me from now on!

For all who asked or mentioned- Teagan is much better. She's had 2 doses of antibiotic, the fever hasn't returned since she went to bed and soaked the fever out with a hardcore sweat last night. We took her with us to Trader Joe's. She's not 100% (as evidenced by the fact that she is napping right now) but she's a ton better and no longer contagious!

You look so skinny.
I am sorry about that run on your Saturday morning though... good heavens. That sounds all sorts of stressful!

I'm glad to read that Teagan is better. You had quite a day! I'm with Garret, by the time I finished reading the post, I was uplifted. You deal with stress with grace and humor.

Have you and Jeff watched "Whip It?" Great roller derby movie.

Glad you got some time to yourself. Amazing what a lift Target can be!

What a day. I would have been sobbing by the time I got home from that 4.5 miles.

So sweet that the family was worried though! :)