When God Speaks... aka A Solution to Lying 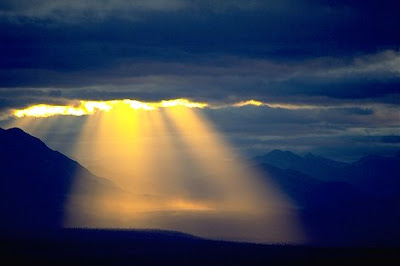 First, let me say that I had NOTHING to do with this. Our pastor doesn't read my blog and wasn't aware of the situation that happened last week.
We have 2 services at church- early service is a much smaller service and far fewer children attend. This past Sunday, there were only 3 children in first service. This means that Pastor Rusty can get a bit more intimate with the kids during Small Talk (the children's sermon).
So Pastor Rusty is sitting on the steps with the kids. He's got Teagan on his right side and 2 other kids gathered in close on his left side.
He starts talking about things we keep and things we get rid of. He talks about how God is with us all the time and how God won't ever trash us.
Teagan is actually listening- I think because it was just 3 kids. Usually she just sits and stays quiet and repeats words when asked to but doesn't really seem to listen to what's being said. But this time, she was very attentive. She was making silly, exaggerated faces- but faces that were appropriate responses to what was being said. An extra large grin, a grimace, etc. She's really invested in what Pastor Rusty is talking about.
And he talks about God wanting us to trash things we don't need- and not just stuff but also choices we make.
God wants us to trash things like being mean to people...
He looks at the 2 kids on his left. He turns to his right, looks directly at Teagan and says...
And LYING and NOT telling the TRUTH all the time.
I couldn't have paid him to do it! I couldn't have come up with it so perfectly! Yay for direct messages from the Big Guy upstairs!!
Her eyes got BIG. She seemed to sit up and pay attention while shrinking back at the same time. She didn't look at me- which is good because I was having to cover my face to stop from cracking up!
During second service, there are maybe 70-80 kids up front. Rusty walks in front of them, moving back and forth. Less of that personal connection. So this time, when he said the words "Lying" and "Not Telling The Truth," he wasn't looking at her... so she did look at me. And she smiled.
We talked about it later. I was relaying the story to Jeff- just the facts, not the reenactment of Teagan's face or anything. And I was explaining what Rusty was saying to the kids- about throwing things like lying in the trash.
Teagan looks at me and says...
I already threw it in the trash!
I hope so, Teagan Ann. I really hope so.
Labels: parenting

Oh, I'd have loved to see her face!

I guess he's got your back.

Those kids will always remember that. Great work Pastor Rusty

What great timing. It will be interesting to see what she does after that talk.

I love getting those direct messages. Although, I usually prefer them when I'm not being called out for doing something wrong. :-)

I think it's awesome that it worked out the way it did!

This is why it takes a whole big world to help parent our children. That's a wonderful lesson.

I'll bet that was quite funny to watch!

Awesome. Perfect timing. Almost like Someone knew what she needed. ;)