The Curse of the Photographer

I love taking pictures. I take oodles of them. I love capturing as many moments as possible.
But that means that I am mostly behind the camera.
It's not that Jeff won't take pictures. He's more than happy to do so. I just won't relinquish control.
We had Thanksgiving. I never gave up the camera. I set it down a few times. I suppose Jeff could've grabbed it up and snapped away. So I guess I did give him a chance, anyway. 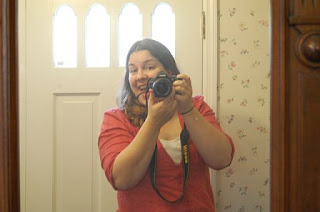 We spent yesterday morning at The Children's Museum. Holiday festivities galore! And one pic of me and Zach. 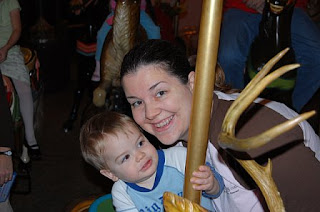 I actually want more pictures of me. Not because I love having my picture taken. But because I want my kids to have as many memories to look at as possible. On the morbid front, if something were to happen to me and I wasn't part of their lives anymore, I would want plenty of pictures for them to look at. It's part of why I sometimes just click pictures of Jeff. He thinks I'm being silly or obnoxious. But I'm really just making sure I have some good preservations of his face, his eyes, his mouth... Because I want to remember every moment.

And good for the police sketch artist too.

Hey!! Comments work for you again!!

No worries- the last sketch they did is still on file with the FBI...

I'm lucky in that Mike takes most of our pictures b/c he's a very good photographer. But I'm not in many of them anyway b/c I am always ducking out.

I worry that my kids' best memory of me will be like that neighbor on Home Improvement, Mr. Wilson, only instead of a fence, my face will be half covered by a laptop screen.