Getting to Know Me...

So I just feel like sharing more of my background and who I am.
I played volleyball in high school. I was even named "Most Improved Player" one year. However, I am not athletic.
I got involved with my high school's Outdoor Club and went on several grand adventures- white water rafting on the New River, hiking/camping/rafting along the Rio Grande, even dogsledding in far northern MN. However, I am not the outdoorsy type.
I enjoyed those things at the time. And I suppose that, in the right frame of mind, I would enjoy them again.
One thing has been with me since childhood.
Theatre.
During my one year as a Brownie (that's yet another story for another day), my troop put on a play. I was the lead. I think my character's name was Lucy. I have no clue what the play was about... all I remember is that I refused to do it! I ended up terrified and couldn't go on. In fact, I think I've repressed the memories from most of that situation because it isn't clear in my mind and I have no clue what the troop ended up doing about it.
But even with that bleak start, I was destined for a life in the theatre!
Junior high. My mom has become friends with a woman at church who owns and operates the concession stand for the Taft Theatre in downtown Cincinnati. At this time, this was the main theatre in the city and this was where all the Broadway touring shows passed through. We started working for her... which meant getting to the theatre early to set up and then selling concessions- candy bars and cans of soda- during intermission. I wish I could say that I remember this being something fun for me and mom, something we bonded over... which I'm sure we did. But the impact on me was THEATRE. I saw shows over and over and over and fell in love over and over and over. I saw Cats and Camelot (even met Richard Harris and got his autograph) and Les Mis and Edwin Drood and Phantom. I fell in love with the stage, the performances, the glory of the theatre. I loved being so comfortable with that building, feeling like I knew the place and it knew me.
Eventually, the theatre bought out the concession stand and my days of mass exposure came to a screeching halt.
In high school, I dabbled. My school was a good 30 minute drive from home so extra-curriculars weren't at the top of the list. I was in one production, did makeup for another. Attended a summer session, took acting classes.
In college, the fever was full strength again. I got involved right away freshman year. My first production was "Emergency Room." I played a homeless woman, Helen, who was a constant presence in the ER's waiting room. I stole things. Got some good laughs. And was hooked. Went on to "South Pacific" and "Our Town" and "Once On This Island." Dabbled in some student written productions, a small improv group.
Then I took a few years off. I was focused on my internship (my degree is in social work), then focused on my job (therapeutic foster care social worker- the job was my life). Moved from Cincinnati to Indianapolis...
I didn't get back into social work. I looked but nothing was paying anywhere near the massive salary I was making in my previous license-required state (starting salary was a whopping 25K). So I sought temp office employment... did a little full time retail work... and then back to the corporate race and I've been here ever since. And what it gave me was time. Time in the evenings and weekends.
Through a casual conversation with a co-worker, I learned that Indy has a large and thriving community theatre scene. So I started investigating and making phone calls. Ended up auditioning for "The Secret Garden" at The Belfry in Noblesville, IN. Got cast in a 2 second walk on role. Someone dropped out and I got moved up to the ghost chorus. Connected with people, made friendships, sang and acted and loved it. In fact, it was during that show that I met someone who is a major part of our lives now- Christy. Which means I've known her for almost a decade!
From there, I continued auditioning. The odds were stacked against me, but I went for the single female role in "A Few Good Men" and I landed it. 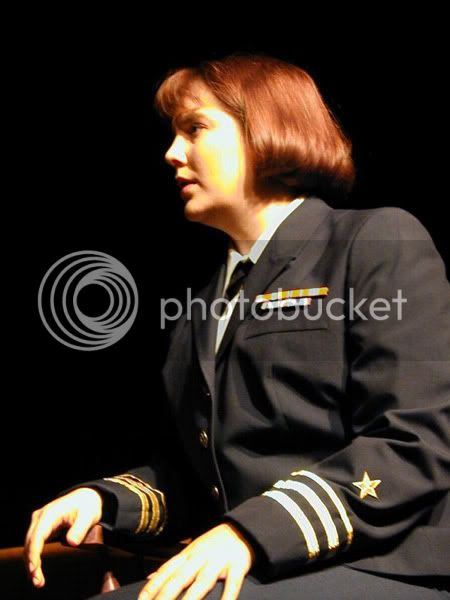 And didn't look back. Auditioned for show after show. Being the "new face," I got some pretty good roles. I was a horse/prisoner in "Man of La Mancha." I was Meg in "Brigadoon." I did a melodrama where I played the spoiled, rich, indulged female. I met my husband when we were cast as romantic leads in "The Snow Ball." I started working backstage- managing the costume room, assistant directing, directing, producing, stage managing. I got involved with the administration end of things by sitting on the Board of Directors to represent the theatre's directors. I also represented our theatre on the Encore Association- a group that builds and recognizes area community theatre. 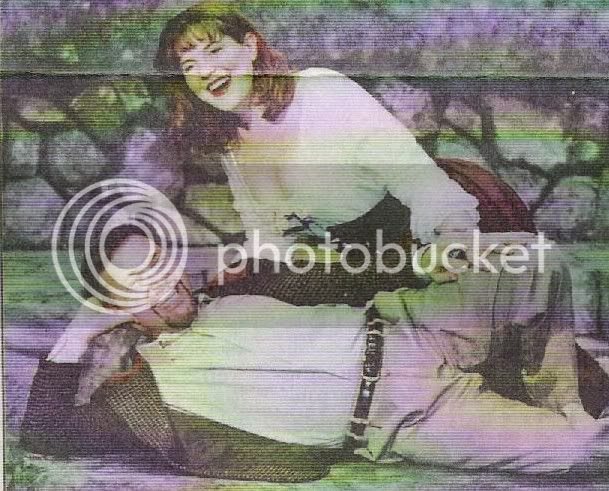 I was heavily involved, as was Jeff. We were approaching our wedding date. I had produced and ended up stage managing "Sugar Babies" at Footlite. Then we got wrangled into "It's A Wonderful Life" at Mud Creek Theatre. We actually missed some rehearsals to run off to Gatlinburg and get married.
I continued with theatre until the last possible moment... until I stepped into the greatest role of my life, the most important production that Jeff and I could be part of. Teagan and Zach.
I was producing and also acting in Christy's production of "Chapter Two" when I miscarried our first pregnancy in 2004. I miscarried the Tuesday of tech week. What a horrible week that was... but thank God for the theatre. Jeff and I were forced to be surrounded by friends who truly loved us and held us up and together during that horrible time. We had to show up (he was on crew), support each other, and focus on a show, a performance. Some nights I took it scene by scene... deflating when I came offstage. I'm certain that it impacted my performance but no one ever said a negative word to me. 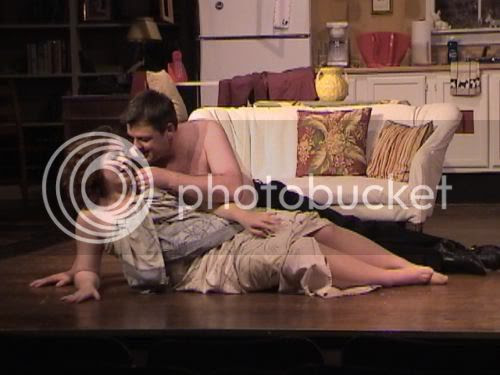 I was directing a young adult production of "Lucky Stiff" when I got pregnant with Teagan. Those kids were so excited for us! I also ended up stepping into the directorial role on "You're A Good Man Charlie Brown" after another director bailed.
During Teagan's first year of life, I tried to keep a tiny finger in the theatre scene. I produced 2 shows- "Run For Your Wife" and "One Flew Over The Cuckoo's Nest." I could produce because it only meant a trip to the theatre as needed- about a once a week commitment- and most of the work could be done from home (phone calls, creating programs and posters). But I didn't like being away from Teagan...
After Cuckoo's Nest, I dropped out of the scene completely. I've even pretty much stopped going to see shows. When we ended up pregnant again... that really changed everything.
I keep waiting for that theatre bug to bite me again... to buzz in my ear... pique my interest.
But being a mom is all that I want to be right now. My kids will be older soon enough. They will be busy with their own activities soon enough... busy with their friends soon enough... These are years that I can't miss.
And because I love theatre so deeply, I don't want to do it until I can give it my all. Prior to having kids, I could eat, sleep, and breathe theatre. I could be there until 11:00 at night during tech week. I could spend a whole Saturday helping to build or paint a set. I could waste away a weekend chasing down props or memorizing lines.
I can't anymore. I just can't. I hope that someday I can again. At the very least, I look forward to the day when the kids are older and we can hire a regular sitter and be season ticket holders at our old stomping ground.
Amazing how motherhood changes you.
Labels: theatre

God, that picture of you in A Few Good Men... you were AMAZING in that!

I always have thought I'd love to do community theater. Not sure that I'll ever do it though-- the kid factor, too.

Back before we were married hubby and I got roped in by one of my mum's friends to be in our local community theatre group's production of East Lynne. I played a maid. It was fun, but even back then we found the time commitment difficult, it'd definitely be impossible now.