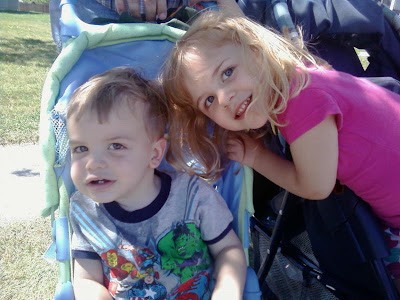 As parents, we memorize and journalize and photograph and video as many "firsts" as possible.
As people, "firsts" are important in life. First job, first kiss, first marriage (hahaha).
It's funny the firsts that stick with us.
I never knew that parades were so important to me. But they apparently are. We took Teagan to her first neighborhood parade yesterday. And it was Zach's first parade ever.
Our neighborhood has a "freedom festival" at the end of June every year. There is a 5k run/walk- that experience might get Jeff blogging again; it was not a good one- a neighborhood festival, a parade, and the weekend ends with fireworks.
We don't do the festival. It's booth after booth of food, crafts, direct sales, etc. We've gone twice- once with kids and once without- and didn't find it very exciting for us.
We watch the fireworks every year from Teagan's bedroom window. We get the full show with no mosquitoes, no crowds, no traffic.
This year, it was a family first. The parade. They close down streets around our neighborhood and in our neighborhood for this parade. It's usually 80 or so floats/groups. We usually make sure we are no where near home or content to be locked into our home during parade time.
This year, Teagan noticed that something was different on our drive to and from church. Folks around here like to set out chairs and blankets to reserve their viewing spot for the parade.
Teagan asked to go to the parade.
But we don't do parades... But we don't... But we... But...
*sigh*
We packed the kids up into strollers and walked the distance to the parade route. We happened upon a shady spot that would remain shady- it was ideal. The kids snacked and played "run around the tree." We played many rounds of "I Spy" with Teagan. A large family group came along and asked if they could share in our shade- and we made new friends!
The parade is getting closer- we can hear the sirens blaring. Soon we catch sight of the flashing lights of the firetruck... and catch sight of the police motorcycles... and the parade has begun.
And I fight back crying. And not the tearful kind. The welling up from deep within wracking sobs kind. Not a sadness thing. The overwhelming excitement of catching glimpses of this "parade" through my kids' eyes. It just struck at me solidly in the chest. And I realized that I feel that gasping, sobbing, wracking, overwhelming excitement at the start of any parade.
And I have no idea why.
The kids loved the parade. They got candy and magnets and we even got a rather large red ball (from Target). There were local TV celebrities, some sports people, oodles of Shriners, local businesses, only a couple of politicians, dance groups, cheerleaders, marching bands, churches.
Teagan's first freedom festival parade. Zach's first parade ever. 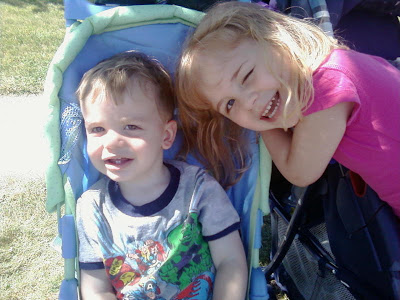 Cuteness. I typically enjoy the street vendor stuff. I rarely buy anything but enjoy the looksy.

I thought about going, and now I wish I had. Sounds like a great time.

Well, now, what IS it about parades?? I like 'em, but not enough to get choked up...what's going in in there, Liz?

I actually have some very fond memories of parades as a child. It was just the sense of something so special that it deserved waiting for--on a crowded sidewalk; on the side of the road--with strangers, all of us in a good mood.

Then I grew up and moved down to Mardi Gras country...and learned a whole different kind of parade! (We were in Mobile, which has parades you'd actually want to take your kids to.)

I still think parades are exciting, if sometimes it seems a little pointless. But heck, fun can be its own point, can't it?

I do not remember my first parade, but I know I've seen a lot. My wife and I have been going to the Evanston 4th of July parade the past few years because it reminds us of those parades we used to see as a kid with all the floats where they throw candy and the Shriners on little scooters as well. Ahh Americana…

i love this festival every year. but this was my first year that i didn't go because i worked all weekend :( Curt hasn't gone and I wanted to take him-- Usually we just do the fireworks & the parade with our group of friends and we were so bummed that all of us are "grown up" this year: so much so that we FORGOT about it until it was too late to request it off!

I am SO glad that you guys went and enjoyed yourselves! Congrats to Teagan & Zach for their first parade!

I had the same emotion when we took Annie to her first kids' stage show -- Sesame Street Live. Seeing how happy she was simply overwhelmed me.

I don't know what it is either but I always get choked up at parades especially the marching bands.