We watched The Mist Saturday night. I think I could have really liked the movie. I've not read Stephen King's original short story but I do want to read it. If you haven't seen the movie and plan to see it and don't want to know about it... DON'T KEEP READING. If you haven't seen it, have no interest in seeing but want to read the synopsis, here's a Wikipedia link with all the details. I didn't like the movie. There was an important thing that wasn't done right and it ruined it for me. Again- don't wanna know stuff about the movie? Don't read this blog entry! You've been warned. Here's the deal. People are trapped in a supermarket in a small town. They are being attacked by fantastic monsters who are part of this mysterious mist that has enveloped the entire town. Turns out the mist and monsters are because of some Army experiment where they have opened some other dimension. In the store are people who've known each other for a long time. That whole small town thing. The main character is this dude- David, I think. He's there with his son, Billy. Billy appears to be 9ish. Billy is having a really hard time, understandably, dealing with the scary crap going on. Wanna know what would help Billy? If his dad would stop running all over the store, doing scary crap with everyone else, going on missions to the next door pharmacy... if his dad would stay and be with him instead of trying to save everyone else. Especially after Billy BEGGED his dad not to leave him again after Billy was almost attacked by a pterodactyl type monster. Jeff was the first to comment. That he wouldn't leave his kids. That I wouldn't leave my kids. That we would help to the best of our ability. But that we wouldn't entrust the lives and safety of our children to a few random people who are also terrified and concerned about their own self-preservation. So the total lack of connectivity between this father and his son was really disconcerting and distracting. I've done some research on differences between the movie and the short story. I really want to read the short story to see if reading it builds the relationship between father and child differently. Then there is the issue of the ending. I didn't watch it. I knew what was going to happen and I knew at what point I should exit so I didn't see the bad stuff. See- I have a really, really hard time dealing with parents hurting their kids. I watched a documentary on Jim Jones not so long ago and the part of the story of how that day played out... when the mass suicide happened... the stories that impacted me the hardest were those of parents taking the lives of their own children. The film ends that way. The dad kills the 3 adults who escaped the supermarket. He also shoots his own son. He then has no bullets left to take his own life. He's yelling and screaming and hears what he thinks is a monster coming to get him... but it's the Army, clearing out the mist, making everything all better. So he killed everyone for nothing and now has to live with the guilt. At least long enough until he can get a gun with bullets. The short story ends with the potential for hope if the reader so chooses. The survivors hunker down for the night after escaping the market. They survive the night... and the main dude hears a single word in the static coming through on the radio... no station, no station, no station... hears a word. So there is hope that there is life out there... and they continue driving to find that life, or to meet their doom, or whatever other ending you choose to follow. So a movie where I should have been focused on monsters and other dimensions and religious cult fanatics (Marcia Gay Harden's performance was really, really good). But instead, I was completely distracted by the lack of realism between the main character and what should have been his number one priority. Why make him have a kid?? I think the movie would have worked just fine if the child hadn't been part of it. His role pretty much made him an "in the way" character anyway. So just don't have him there at all! 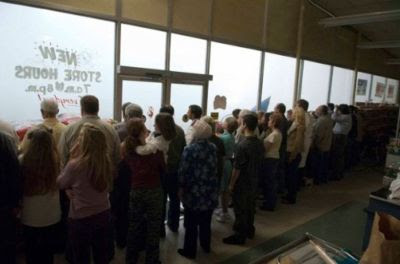 But, to the point of what you're saying here...

I agree. Totally. I have nothing substantive to add. I just agree with you completely.

I haven't seen this movie but I have read the story.
You will be much happier with the story.
I recommend you read the book if you get time.
Stephen King books are so detailed, they are difficult to translate to movies.
I am a HUGE Stephen King fan and have read most of his books. I generally stay away from the movies, they are always disappointing.

This is one of my favorite Stephen King stories. I reeeeeeally wanted to see the movie. But given an ending like that, I don't think I want to.

I agree that dad's tendency to run off and abandon his son for the sake of keeping the excitement coming was weak, but that's typical King stuff; the family relationships in his stories will usually dissolve under the pressure of the given horror.

But it sounds like they went too far here.

Anyway... it's a great read. There's even a book on tape version that I heard one time that was very faithful to the book.

Good grief! Skipping that one.

I watched this last summer with a few of my girl friends one night. We were all making fun of it, thinking it was so cheesy, etc but the ending tore us all up. It's one of those movies that still just puts an ache in my heart, even now.

I just couldn't imagine living with that, that horrific guilt, and just thinking about it makes my stomach turn.

Pssst, please stop by Casa Hice, I have something for you...