Prithee, Hast Thou Spent the Morrow at the Faire?

We had a wonderful and busy weekend!! Quick run down... Friday night was the Homecoming football game, Saturday we had dance class, ran errands, and ate dinner out (and then I got to head out for a fabulous evening with friends), and Sunday was church and then we spent a few hours at the Renaissance Faire, came home for some play time, and Teagan and I baked a cake. Whew! Chocolate Mug Cake didn't happen. Intended to. But Teagan doesn't like chocolate and I just had a feeling it wouldn't end well. So we went with just plain old yellow cake mix and butter cream icing and fun autumn sprinkles. But you aren't here for the cake, right? Oh, fine. We'll get to the cake in another post. Right now, I want to share our day at the Faire! Let's get used to the fantastic costumery first. The Royal Guard, leading the Queen's procession, and various Lords- young and old. 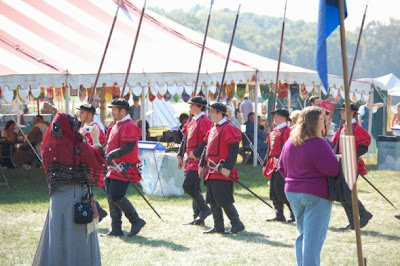 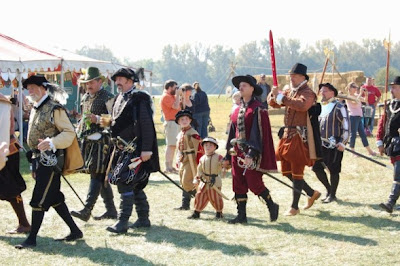 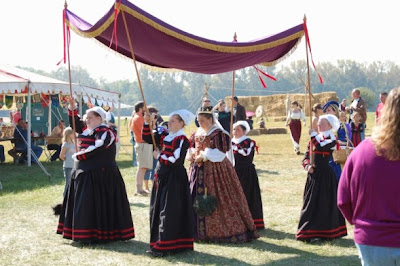 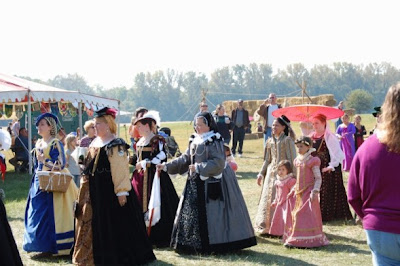 This was so cool! A living statue. If you gave him a tip, he handed you a scroll. The tiny scroll contains the legend of "wail of the banshee." 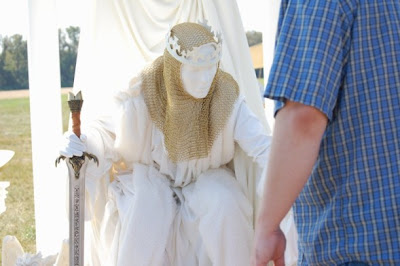 Teagan got to meet a jousting horse named Paladin. He was a giant animal but so sweet. As Daddy carried her away, Teagan said, "He was so nice!" 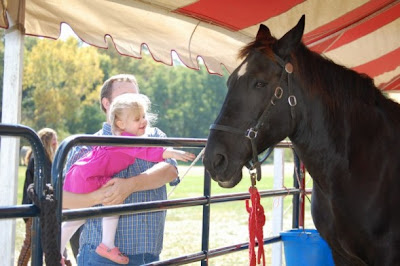 And nothing is more fun than wood, painted cut outs, right? 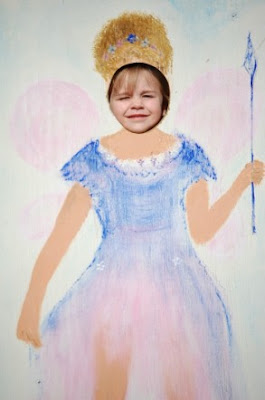 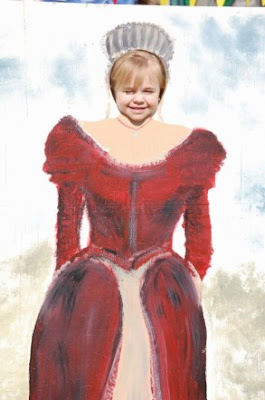 And Teagan, the Knight in Shining Armor! 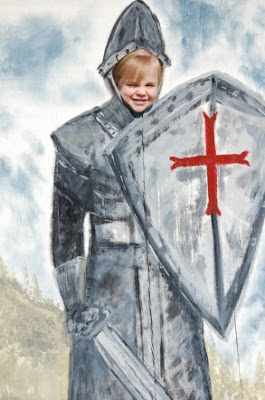 And there was a pony ride- Teagan was very excited. The pony's name was Rowdy and he got lots of nice pats from me and Teagan during the ride. After she dismounted, she said goodbye and gave him a final pat and he lifted his head and wiggled his lips at us- our own goodbye! 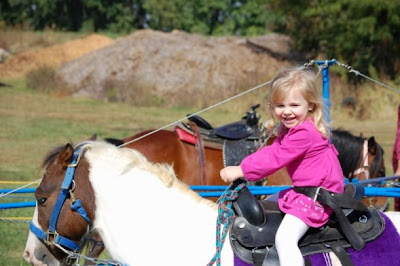 The peasant Olympics- they are sword fighting with baguettes. 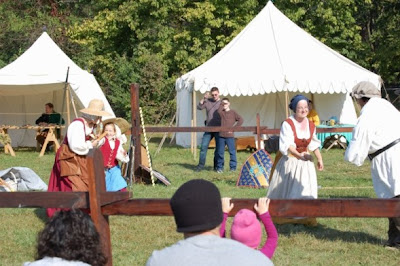 And the winner... I swear, the phallus in her hand IS a baguette!! 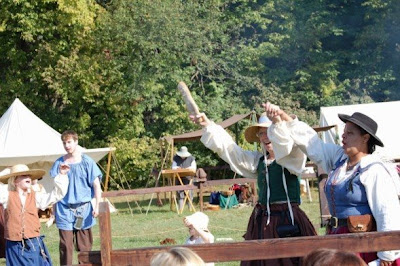 Teagan got a beautiful flower and ribbon crown. She enjoyed showing it to Zach. 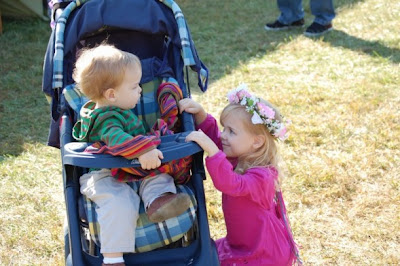 Isn't it so very pretty? 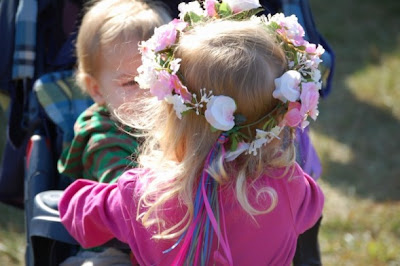 Of course, she didn't wear it beyond showing it to Zach. *sigh* But that's OK. Mommy got to wear it for the rest of the day!! 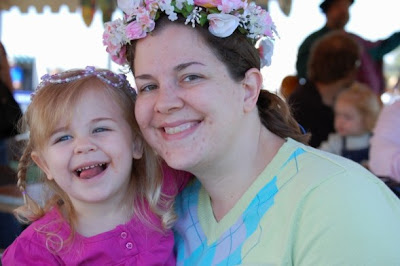 Teagan also got to play a lot of games in the Kiwanis Kids Karnival. She and Daddy went through a labrynth. 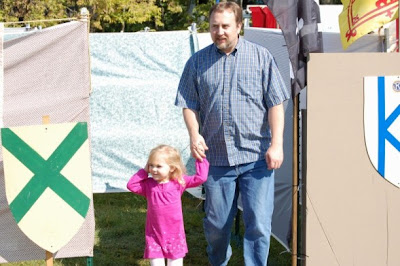 She also played Frog Catapult. There is a "sword" in a "stone" with a basket on the handle. Place the rubber frog in the basket, pull back, and aim for the "pond." This "monk" was so good with Teagan- really got her involved in the game and how it worked. She wasn't so sure about it at first... 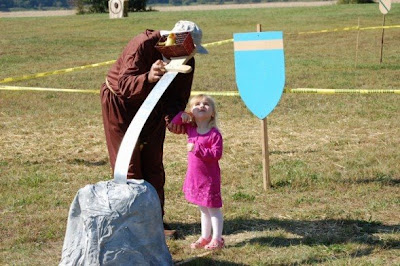 But after a practice try- she had a blast! 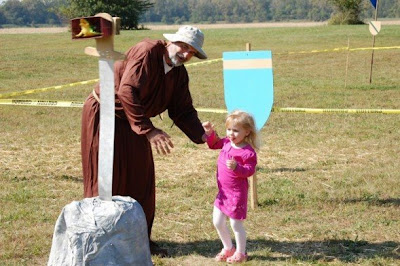 And my baby shot a bow and arrow!! It was a special small size and no sharp points, of course. But she was excited to be able to try it and the "monk," again, was so good with her. 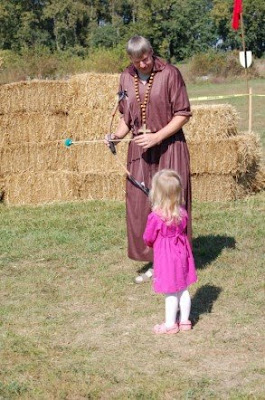 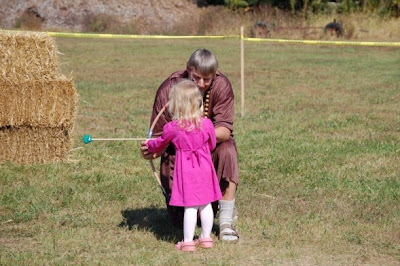 And what did Zach think of all of it? 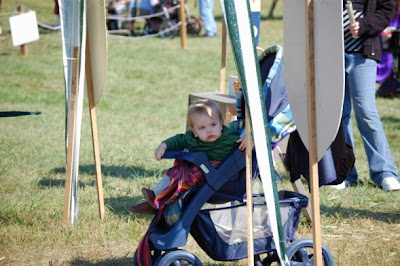 And after that, he pretty much slept through everything.
Another cool happening, that we didn't get pictures of, was a group of singers that walked about, singing little tunes. We saw them and Teagan got excited so we took off running to catch up. They had stopped singing but one very nice lady ended up making our day so very special. She saw Teagan, so small, gazing up at them in their beautiful gowns. She made eye contact with me and approached and asked Teagan if she would like to hear a song. Teagan and I had a private concert! They stood and sang 2 songs to us. One was a period piece and it was fun and peppy. Something about "greet the morning with dancing." And then they tried to get Teagan to sing along by doing Twinkle Twinkle but she was so star struck that she got all shy when they included her. It was only a few minutes... but it made Teagan's day so special!
We also picked up Teagan's Halloween costume- so now you have something to look forward to in a month! So that was the pictoral for today. I have lots more stored up for my readers... dance class, cake making, playing on the deck, even a scary spider! And lots of thoughts to share... so keep clicking my way!
Labels: faire, renaissance, sunday