I'm a fan of the Olympics. I don't really follow any sports on a regular basis. But the history, tradition, pomp and circumstance... the global gathering of athletes... it fascinates me.

I'm a fan of good sportsmanship. I love hearing real stories of athletes or teams making good, fair decisions. Even if to their own detriment. I remember a story a couple of years ago of a college softball team who helped a senior player from the opposing team round the bases. She had hit a home run but broken her foot or ankle or something on her way to first base. Game rules indicated that she wouldn't get her home run point if she didn't round the bases herself. So the players of the opposing team picked her up and helped her around the bases, pausing to make certain her foot touched each one.

Sportsmanship... to me, it shows an athlete who is passionate about the sport, the art of it. An athlete who isn't caught up in only being focused on how to win, win, win.

I remember watching the race. It was the 200 meter final. And 2 runners were disqualified for stepping out of their lane. Shawn Crawford went from 4th to 2nd after the 3rd place (Wallace Spearmon) and 2nd place (Churandy Martina) runners were disqualified. I remember at the time... thinking that I wouldn't feel right about that medal if I were Shawn Crawford. It's an easy sentiment when you aren't the one who dedicates their career to training and competing and getting to this place. It's easy to sit in the comfort of my home, knowing I can't even run a mile on the treadmill at the gym, and shake my head at the situation.

An article from Yahoo:

NEW YORK (AP)—Shawn Crawford confirmed that he gave his Olympic silver medal to Churandy Martina, the sprinter who finished second in the 200 meters but was later disqualified for running out of his lane.

“I’m like, if a guy is 10 meters in front of me, I don’t care if he stayed in the middle of his lane,” Crawford told The Associated Press on Friday after finishing third in the 60 at the Millrose Games. “He was going to beat me anyway. He didn’t impede in anybody’s race.”

Crawford, the 2004 Olympic gold medalist, originally came in fourth in Beijing. Teammate Wallace Spearmon was third but was disqualified for running out of his lane.

American officials studied video of the race and then filed a protest against Martina for the same error. Martina and his Netherland Antilles team have appealed to the Court of Arbitration for Sport, arguing that the protest was filed too late under rules set by the International Association of Athletics Federations.

Martina finished in 19.82 seconds behind world record-setter Usain Bolt. Crawford’s time was 19.96. “It wasn’t about doing the right thing. It’s just me as an athlete—I feel like we all compete and train for four years to get to the Olympic Games,” Crawford said. “We got there, he was told he finished second after all that, he took a victory lap. I can understand his humiliation and embarrassment and all that.

“Me being an athlete, I know how he feels, so I feel like it was to me to give it up to him.” Crawford left the medal for Martina at a hotel during a meet shortly after the Olympics. The two have since spoken about it.

“He was very surprised, thankful about it,” Crawford said. “He thought it was very big of me to step up like that.”

Sportsmanship. Defined by Merriam-Webster as "conduct (as fairness, respect for one's opponent, and graciousness in winning or losing) becoming to one participating in a sport." 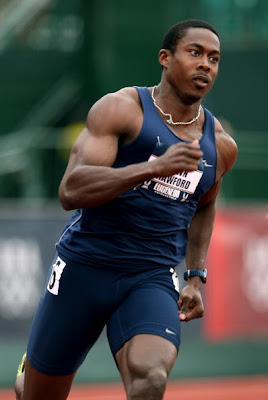 And in a blog post about a track and field Olympian, I'd be remiss not to mention that I have at least one reader who IS an Olympic athlete!!! And it just tickles me to pieces that she reads my blog and I love reading hers. 5th Time's the Charm, Jackie Edwards. She's a long jumper and she went to Beijing as well. And I love her blog!

With the Super Bowl today, this is a very timely post. How much sportsmanship are we likely to see from those multimillion dollar athletes? I'm 100% with you on sportsmanship not being focused on winning. It drives me wild to see kids on baby-league teams driven by their parents as if they were trying out for college scholarships. I thought sports was supposed to be about fun! When did that change??

Great post, Liz. I have a soft spot for track & field, too - especially the sprints. I'm in awe of the hours of training a dedication needed to perform for just a few seconds. How milliseconds separate winners from near-winners. Gotta run - going over to Jackie's blog now because, yes, I'm a groupie. On yer mark, get set.....

Marissa Dudek. Remember that name. Mariss Dudek grew up with my daughter, Gina. Marissa went on to University of Pittsburgh and has been training for the US Olympic Track and Field Team all her life. She is a pole vaulter. I ran into Marissa recently and she told me she got injured not long before Olympic trials and couldn't compete to try to secure a place on the team. But she back to 100% and training Florida and hopes to be on the 2012 team. You can google her to see how accomplished she's been.